The Observatory: An Interview 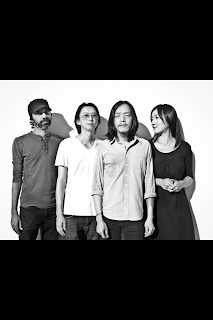 The Observatory are the premier alternative rock act in Singapore, or rather the alternative rock band of this region. Since 2002 they have released 4 albums with meticulous care put in for both the content and the form of their CDs/LPs which made their artefacts highly collectable, if you are a record-collector type. For those who are more into the music only, the progressive and experimental arc the band has traced for the past 10 years, is filled with rewarding surprises if you are one to sought more than mere entertainment from your cultural consumption. The interview below was conducted with the band over email. The four members of the band talk about the up-coming new album, "Catacombs", as well as their future plans, and more. Go to The Observatory to find out more on the band after reading the interview if they are totally new to you.

1. In view of the fact that this is your 10th anniversary, what does it mean to be The Observatory in 2012 after all these years?
Dharma: Other than it meaning we are 10 years older now, it also means we have managed to last that long making music in this environment. That does feel like quite an achievement if you consider how the cost of living has been going up over here. On top of that the 4 of us are doing this full time or at least we don’t have regular jobs anymore. Not sure how long more we can last but it sure feels like we want to give it everything and more while we still can. Looking back at our general outlook abt music 10 years back, it’s still the same…. we like to make music that challenges our personal expectations and not have it compromise to monetary needs.

2. What and who drive the creative direction of the band? Is there anyone who dominates?
Vivian: I think the music direction of the band has always been a collective effort. In the early days, it used to be Leslie who would write the bare bones of a song first before we set music arrangements to it. But since A Far Cry From Here, we've been individually bringing songs to the table or passing ideas around, then letting these develop naturally as we work together on it. Up until Dark Folke, we would put our own arrangement spin on whatever song idea that was in circulation at the time, first by recording our own parts in our bedroom setup, then trying it out during jams. With Catacombs, the process was a lot different. We would come up with our ideas, record a simple fragment or a longer, more filled out version, then pass it on. After listening and letting it sink in a bit more, we would then meet to work out the songs inside our studio proper. We would literally spend days and weeks playing it out and seeing where the song leads us. Leslie would also start to mumble some lyric ideas once we had a decent shape of a song in place. Due to the fact that we went to work with one another every day, in a space of our own, we found it much easier to concentrate on the music without losing momentum.
3. How do The Observatory fit in in today's music climate?
Victor: I don't know to be honest. There's so much music out there and we have not given it any thought about where we'd fit, except to focus on our own direction when we were working on Catacombs. In terms of our own direction, we've been been getting colder and darker since our first album, which was sort of a natural progression for us over these years. 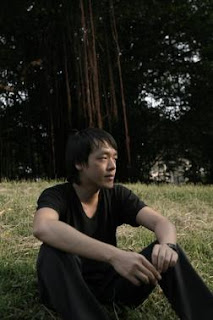 4. I heard that The Observatory will be leaving Singapore soon and to be based in another country soon. Can you confirm this? If yes, what are the main reasons behind this move?
Leslie: Viv, Dharma and myself have plans to relocate to Canada. The band is not. But there might be an Observatory (Canada) and The Observatory (Singapore). Our producer Jorgen joked about this. Haha. Who knows? But without Victor, it would seem a bit of a stretch still calling it The Observatory. We don't know what's going to happen yet. My reason is to live somewhere else for a while. One that is more suited for my
temperament. A quality of life that's higher and of a pace that's slower than that of Singapore. Our ancestors were immigrants, so there's probably a lot of that running in my blood still.
Dharma: it will be nice to live in a place where one can work in a simple job and be able to get by modestly…yes, minimum wage level and a better quality of life is what I’m looking for. Also where nature is in abundance and not too far away. 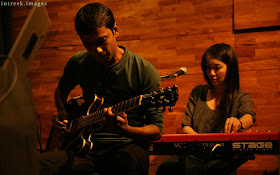 5. How does the exit of Evan Tan and Ray Aziz affect the making of your new album Catacombs?
Dharma: The main thing I would say is the approach in playing drums. As none of us are actual drummers (Or as good as Ray on drums!), we took an unconventional approach of doing the drums. The main drum duties were shared by Les and Vics, on some songs both playing at the same time. When there was a need for bass and Vics was unable to cause he was doing the drums, then Viv would do it on the synth or Les would play it on the guitar. There is one track where Vics played drums and synth bass at the same time too. So basically there was quite a bit of shuffling in our roles. I took on doing more sounds/noise, filling the void from Evan’s departure.
6. What can we expect to hear from your forthcoming album? Will there be any marked shift of musical direction and sound?
Vivian: I think listeners might perceive Catacombs as having a totally new sound and direction. It's hard for us to say as we've lived and breathed these new songs for about half a year now, and it's not really that strange to us. It's hard for us to make the same album again, every time. It might seem sadistic but we do thrive on the experience of getting out of our comfort zone. We like to explore shades of grey instead of doing what's safely black or white. If we try to do a bluesy song, it will still come off strange. If we do anything metal, it'll probably not gel with the traditionally metal listener. In music, we like aggression but we also like beauty and fragility, and there's a lot of both in Catacombs. In temperament, we often come off melancholic but even that complexion has become darker. We're venturing to places that are more sinister and will probably make most people uncomfortable. But that's what discovery entails, the willingness to explore anything, even the stuff out of one's usual boundaries. In terms of rhythm, we hardly utilised drums on Dark Folke. On Catacombs, both Victor and Les are playing drums and exploring more industrial rhythms. Dharma also heavily adds to the forceful rhythmic element. I chip in a little snare and tom on a couple of tracks and play keyboard bass on most. There's definitely a more defined, stronger pulse on this new album. It's trance-ish and hypnotic. You might even be able to dance to it, well, at the very least, nod to it. In terms of arrangement, it is by far, more singular and focused than anything we've put out before. Leslie's vocals have also finally found their real timbre. To me, it definitely is our most interesting sounding album to date.
Psychmetalfreak at 2/12/2012