One Man Nation - A Singaporean Artist in Exile, An Interview 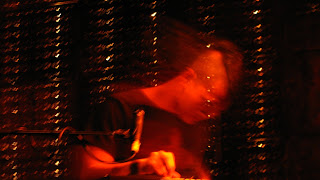 In early November 2011, I met up with Marc, the man behind the project One Man Nation for a chat. So far One Man Nation has released an LP on Austrian record label, Moozak last year, entitled SUSPENDED IN A VORTEX IN THE MIDDLE OF A BOWL FROM TIBET / WHEN I WAS YOUNG I WAS EASILY AMUSED, BUT NOW IT IS ALL, THE SAME. AND THE SAME.... His album refuses to be pigeonholed conveniently, call it experimental, avant-garde, electronic or sound art, it is one and all of those adjectives listed.


The session started with a question on his personal musical path; to Marc, the discovery of the computer as a tool was a pivotal moment but it did not happen immediately thereafter. He traced the genealogy of his musical development as followed:

2004 – beginning of the use of a computer, but with guitar added

2005 onwards – more full-on use of computer, and he has used the similar setup since then, with a conscious emphasis to make sure that things do not get too techie, as to him, the music and the performance are much more important.

Marc never stopped stressing the power and significance of the collective creative experience with other musicians and artists in his creative journey thus far, as to him each collaboration goes beyond mere interaction and communication but it is about the sharing of the moment between the parties involved. He could not highlight enough that to him, he does not want to just play music but to him, the entire experience of musical creation and immersion is more than the current neo-liberal belief that all arts are just essentially entertainment and nothing more. On the other hand, he does not want to fall into the trappings of the other end of the spectrum, which is elevating what he does into something on the pedestal, i.e. high-brow academic platitudes/museum and art gallery fodder. He is always drawing what he does as a form of a continuation of the punk spirit which brought him into music and the arts in the first place. It is about breaking socially dictated norms and more vitally, breaking the artificial bourgeois spotlight placed on the spectacle of musical presentation/performance.


We moved on to talk at length about experimental art; we both agreed that it should be about breaking away from the many stifling cultural norms –all artistic and musical experiences should not just be spectators standing there to watch but instead both the artist and the audience ought to be involved in the shared immersive trip, and Marc mentioned a possible shamanic one but yet there should not be an invisible hierarchically-defined line between the person expressing & the people responding.

Naturally we also talked about the earlier proponents of experimental art like dada & Fluxus, which foregrounded innovation and breaking away from cultural/dogmatic confines, as opposed to the institutionalisation of the “experimental art” today. It must be about pushing forth the process as well as the creative intentions of the artists and not something driven by careerist and opportunistic drivel so common found today.

We then returned to review about Marc’s personal intentions behind his art thus far. When probed, he stated flatly that he sees no difference between what he does in his solo work as one man nation and his many varied collaboration with other artists. I then asked for an epiphanic account from Marc of a very exceptional collaborative work that he could share. He brought up Truna, a Spanish musician, whom he has an Improv duo with. The form might be nominally punk but it has been a fulfilling collaboration for the parties so far as it was like an artistic and creative conversation during their performances, a venture which is very different from One Man Nation solo project.

Spared from the type of state persecution underwent by many older Singaporean artist, Marc has been globe-trotting to Rotterdam, India, Indonesia and Spain (currently he maintains a residence in Spain, Granada but he is usually not there most of the time), and he is also focusing more on The Unifiedfield, an artists-run organisation which the Wire magazine featured in its Global Ear series last year. I thus tried to source out the provenance of his current nomadic lifestyle. Without batting an eyelid, he confirmed my suspicions that he had always wanted to leave Singapore as a child, and he has not found a way to remain here and thus he simply cannot see himself staying in Singapore and he grabbed the first chance he could to follow his wanderlust. Thus, after the mandatory military conscription duty here, he left to tour, not the typical packaged style of course, but punkish, DIY way around Asia in 2003 and thereafter to Europe since then. He does not see much here in Singapore. It is not so much that he is totally rootless but he up-fronted his strong disdain for the general conformist and materialist mentality. We concurred that the whole society in Singapore is in general not made for individual discourse as the overall structure is stringently top-down and media dictated (which is closely monitored by the state as well), the dreary day-job situation to support the materialistic wants and he was bemused by the local grant-doling institutions for having a very narrow mind-set in their relentless search for sponsoring and supporting artists and art forms/projects here which have to have a prominent Singaporean agenda/front to them. He feels that the local arts administrators are still not very well-versed in the fields of art and Singapore despite its claim for the being the top in many areas, the arts is one glaring gap which must be seriously looked into.

However we also agreed that in Singapore even the arts is largely about the economics which sad to say we really cannot judge based on monetary basis; either that many Singaporeans just follow a well-trodden path that everyone is going down on. Perhaps it is due to the state of Singapore that it is in: the solid security of it all and the hyper planned-out nature of our day-to-day (though the recent SMRT debacles proved otherwise). With all these in place, it can easily lead to general complacency amongst the populace and in turn, their thought processes are seriously affected. And if one would to apply the Maslow’s hierarchy of needs, we are not getting better here as Singapore, despite the prosperity (economic but not in other areas), we are in actual fact more enslaved to the entire system due to the high cost of living & the way and wants of most Singaporeans.

From politics we next turned back to the personal. Marc shared that his globe-trotting experience has shaped not just his musical but artistic self as even though creatively he is having some sort of a lull, but to him, art is life, life is art. One Man Nation is what he is, who he is and whatever he does daily.

I surfaced the recent acceptance and in fact active encouragement of the corporate world to promote the idea of creation and he feels that it is all about absorbing what they think is useful for them to help barf up their coffer at the end of the day. Business as usual, mate.

He then went on to talk about the importance of introspection in his daily life which is a very crucial process in his art. Seen by Marc as a process key to his personal existence, his intention to create is not the only thing out of this, but instead he is consuming life itself as the same time as it is about how he lives. He constantly reminds himself that he does not want his art-making to be tainted by commercial intentions and vanity. If there is money then it is collateral but definitely not the main thing. But he admitted that it has been a tightrope to balance to live & create, for whatever reasons he feels so far. It is not easy to live the way he is as it has no room for complacency, but the trade-off is that this instability which he faces daily makes him appreciate everything in life, which gives him the insight to treasure the moments in life.

Towards the end of the interview I asked him for an epiphany. And this is what he related to me:

He was playing with some dancers in Bilbao, at the Festival of Improvisation 2007, which annually invited both acoustic and electronic musicians, dancers and other artists to just come together to jam. At this festival, he was the nominal electronic musician with his computer and he was largely still in his “electronic musician” mind-set, as he wanted to match the “right” music/sounds to the setting. Then it suddenly hit him that he should just think beyond creating music but to instead feel the temperature in the room, sense the lighting, feel the size of space, connect with the people in the space, and more, as everything he was doing and was attempting to do in there was actually part and parcel of a synthetic fuse with the set and setting to create. He concluded that musicians who are usually too caught up in the conventional music-making procedure, very often fall into the trappings of the male patriarchal schema.

Finally when asked about the meaning behind his project, One Man Nation, he expressively stated that it is all about going beyond nation-state and nationality, to be in a world without any borders, in other words, to even go beyond international, but to be an outer-nationalist at the end of the day. 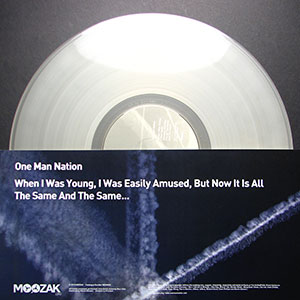 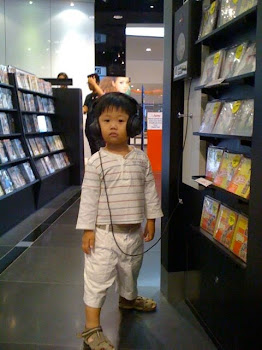 "Truth lies in the extreme."